Surf Fishing Report:
There were Sea Mullet, slot Puppy Drum and Bluefish caught at the Point. Some Red Drum were caught and released. Sea Mullet and Skates were scattered on the Frisco Beaches. There have been some nice size Bluefish caught at Oregon Inlet and Patrick Stage caught a whopper using a popper. I love it when people tell me their bait of choice.

Offshore Boats Report:
The Offshore anglers had an astronomical day catching Mahi with some gaffers. There were some Blackfin and Yellowfin also.

The winds are SW at 17 and the water temp is 51 degrees. Sunny, nice day, flat Ocean, breezy. 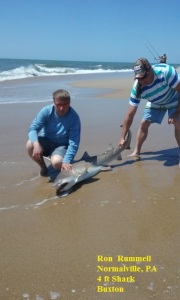