Offshore Boats Report:
The fleet had a slower day than usual but there were still good numbers of fish laid out on the docks. There were Yellowfin, Blackfin, Dolphin and Tilefish. Also a 408 lb Blue Marlin brought in.

The winds are SW at 14 and the water temp is 53 degrees. Sunny, flat Ocean, breezy. 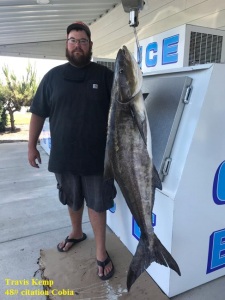 This entry was posted in Fishing Reports and tagged Travis Kemp. Bookmark the permalink.
<span>%d</span> bloggers like this: