Surf Fishing Report:
We had somewhat of a break with the heat yesterday and we had our usual afternoon storm.
Sea Mullet, Pompano, Spanish and Bluefish reported up and down the beaches.

Inshore Boats/nearshore Report:
Nearshore anglers had heavy action decking Ribbonfish, plenty Spanish and Bluefish, some Grouper and Amberjack. Inshore also had Ribbonfish with light tackle and some on the fly, Speckle Trout and Flounder.

The winds are SW at 12 and the water temp is 69 degrees. Sunny, good surfing swells, light winds. 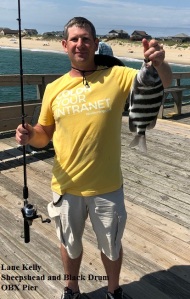 This entry was posted in Fishing Reports and tagged Lane Kelly. Bookmark the permalink.
%d bloggers like this: