Surf Fishing Report:
We have another scorching hot day in store for us. Hatteras beaches were the only ones reporting Spanish yesterday with Bluefish and Sea Mullet on all the south beaches. Croaker and Spot was scattered and ramp 48, 49 and 43 had 2 to 5 lb Pompano. North of the inlet there were Sea Mullet, Bluefish and Croaker.

Sound Fishing Report:
The Little Bridge on the Nags Head/Manteo causeway reported Stripers and Spot. The 3 ½ lb Trout I posted yesterday was caught on the little Bridge. I was told he lost one bigger than that. So there are some Trout to be caught.

Offshore Boats Report:
Mahi and Tilefish catches were spectacular Saturday with the fleet catching their limits of both. There were Wahoo one weighing in at 80 lbs and Sea Bass. A 300 lb Blue Marlin was caught as well.

The winds are NW at 9 and the water temp is 70 degrees. Sunny, flat ocean, light winds. 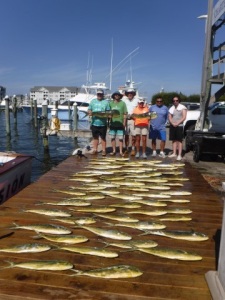