Surf Fishing Report:
Sea Mullet along all the beaches with Avon also having some Sea Robins, Spot and small Bluefish and Frisco having Pompano as well. The beaches from Kitty Hawk to north of the Bridge are catching Sea Mullet with some nice size and Croaker Spot and Pompano in Nags Head.

Offshore Boats Report:
It was an impressive day for the bluewater fleet returning to the docks with good numbers of meat fish. There were Yellowfin, Blackfin and Mahi caught. There were 70 boats fishing yesterday and it was quite a show with 60 Billfish releases.

The winds are SW at 5 and the water temp is 76 degrees. Sunny, calm winds, small swells. 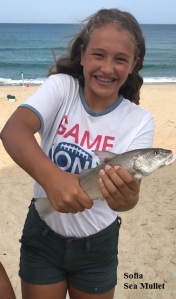 This entry was posted in Fishing Reports and tagged Sofia. Bookmark the permalink.
%d bloggers like this: