Surf Fishing Report:
It was a beautiful day, cooler temperatures and no humidity. More of the same today. Frisco reported Pompano, Sea Mullet and Bluefish, ramp 44 also had Bluefish and Avon anglers caught Sea Mullet and Pompano. Sea Mullet and some Bluefish on cut bait north of the inlet.

Sound Fishing Report:
The Little Bridge on the Nags Head/Manteo causeway reported some Spot and lots of Crabs.

Inshore Boats/nearshore Report:
Sheepshead around the Bridge and Bluefish, Croaker and Sea Mullet in the Inlet.

Offshore Boats Report:
The winds were a hindrance yesterday. Only a couple of boats fished. They caught some Dolphin and Tilefish. There also was a White Marlin release.

The winds are E at 17 and the water temp is 76 degrees. Sunny, windy, rough Ocean. 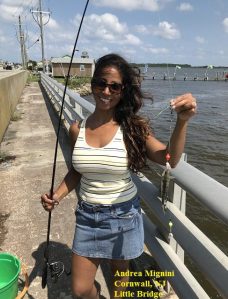 This entry was posted in Fishing Reports and tagged Andrea Mignini. Bookmark the permalink.
<span>%d</span> bloggers like this: