Surf Fishing Report:
Hatteras Island reported Bluefish up and down all the beaches with plenty small Trout also biting. Buxton had some Sea Mullet, small Pompano and Croakers. Frisco had a puppy and so did the point. Decent size Bluefish with Croaker and Spot north of the Inlet. Michael Harsh reported the Spanish were thick in Carova with good size Blues and small Trout.

Offshore Boats Report:
The boats are back in the water, hoping to sail on Friday.

The winds are NE at 16 and the water temp is 79 degrees. Mostly clear, rough Ocean, windy. 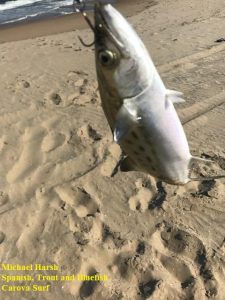 This entry was posted in Fishing Reports and tagged Michael Harsh. Bookmark the permalink.
%d bloggers like this: