Surf Fishing Report:
There was some rod bending fish caught yesterday. The Point and Avon caught citation Drum. Avon also had some citation Mullet weighed in. Ramp 43 caught Sea Mullet, Puffers and Black Drum and keeper Flounder. Slot Founder were also reported at 38 and 55 and Bluefish everywhere. Conditions changed quickly from yesterday and the water has muddied up.

Offshore Boats Report:
Offshore finally made it out yesterday and caught Yellowfin, Blackfin, Wahoo and some Mahi.

The winds are W at 11 and the water temp is 61 degrees. Cloudy, light winds, clean swells. 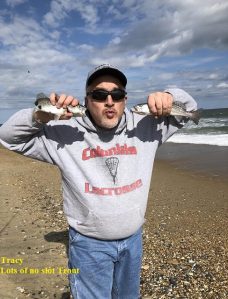 This entry was posted in Fishing Reports and tagged Thomas Brooks, Tracy. Bookmark the permalink.
%d bloggers like this: