Surf Fishing Report:
Yesterday was a pleasant day on the Outer Banks. The wind switched to NE and it was a few degrees cooler. The Ocean is calm and much warmer. The fishing picked up on the Island with Spanish from the Jetties to the north side of the point. Gray Trout in Frisco and Trout and Drum in the Avon area. A few Croaker, Sea Mullet and Spot reported on the north beaches.

Offshore Boats Report:
It was another big Mahi day and the fleet caught Yellowfin and Tilefish as well.

The winds are SW at 5 and the water temp is 77 degrees. Sunny, breezy, flat Ocean. 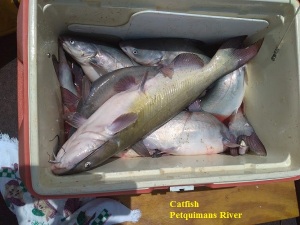 This entry was posted in Fishing Reports and tagged Grant Wilson, Trisha Allen. Bookmark the permalink.
%d bloggers like this: