Surf Fishing Report:
It was a tough day to get on the beach between thunder storms. On the south beaches there were some Sea Mullet in Avon and Buxton. Hatteras caught some Bluefish, Pompano and Spanish. On the North beach’s we had torrential rains all day with flooding. This morning the water temp is back up to 77 degrees and one pier told me the water is clear. We should be back in business.

Offshore Boats Report:
It was not the best of weather but the boats that sailed did quite well. They brought in Blackfin and Yellowfin, Wahoo and some Mahi.

The winds are NE at 17 and the water temp is 77 degrees. Sunny, breezy, rough Ocean. 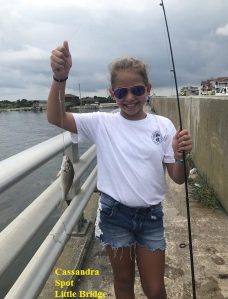 This entry was posted in Fishing Reports and tagged Brian Warren, Kanssandra, Mason Macdonald, Wally Overman. Bookmark the permalink.
<span>%d</span> bloggers like this: