Surf Fishing Report:
A beautiful Holiday day on this sandbar. There were some Sea Mullet, Bluefish, Spanish and Pompano scattered on the Island and Sea Mullet and Bluefish. On the north beaches. I received an e-mail from Mark Khayas telling me about 6 largemouth Bass he caught from one the canals in Kitty Hawk.

Offshore Boats Report:
he fishing is back to normal. The fleet caught Blackfin, Yellowfin, Dolphin, and Tilefish. White and Blue Marlin citations and some Sailfish as well. 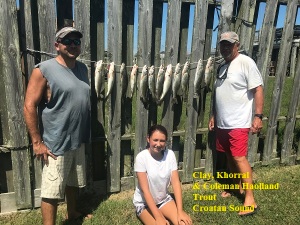 This entry was posted in Fishing Reports and tagged Bob Gregory, Coleman Holland, Jackson Longo. Bookmark the permalink.
%d bloggers like this: