Surf Fishing Report:
Hatteras Island had a few Croaker and Bluefish reported with a 48 in Drum off of ramp 44. A few Trout were caught on this side of the bridge.

Offshore Boats Report:
The fleet was able to sail after 2 days of sitting at the docks. It was a good day with most of the boats bringing in their limits of Yellowfin. The Wahoo catches were also amazing with many citations caught and there were some Dolphin. Several White Marlin were released.

The winds are NW at 12 and the water temp is 65 degrees. Sunny, light winds, rough Ocean. 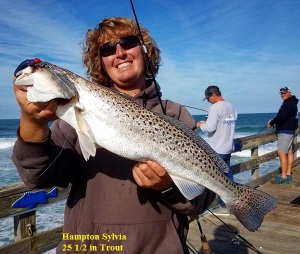 This entry was posted in Fishing Reports and tagged Hampton Sylvia. Bookmark the permalink.
%d bloggers like this: