Sound Fishing Report:
The Little Bridge on the Nags Head/Manteo causeway has Trout this morning with some keepers and also White Perch.

Offshore Boats Report:
The Yellowfin bite was phenomenal again with boats limiting out and with a few Big-eyes included.

The winds are SE at 8 and the water temp is 66 degrees. Mostly cloudy, light winds, small swells. 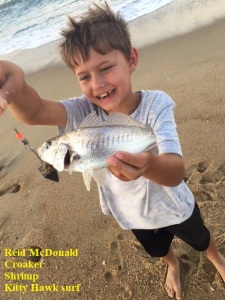 This entry was posted in Fishing Reports and tagged Chase McDonald, Matt Tuschong, Reid McDonald. Bookmark the permalink.
%d bloggers like this: