Surf Fishing Report:
There is a report there were Spanish and Bluefish caught at the point. Maybe that has something to do with the fact that now the pedestrian access is now open at the point. Sea Mullet and Bluefish were also reported on the Hatteras beaches. We have some Sea Mullet, Spot and Trout.

Offshore Boats Report:
I I thought the fishing report would be sparse but the fleet fished through a few storms and returned with a bunch of happy anglers. It was a Mahi Mahi day for the offshore fisherman. I borrowed a photo from one of our marinas to show what a good Dolphin catch looks like. There were also a few Tuna and some Wahoo in the mix and Marlin releases. I am a happy person when I have decent news to report.

The winds are SW at 10 and the water temp is 79 degrees. Sunny, light winds, Clean swell and the surfers are out. 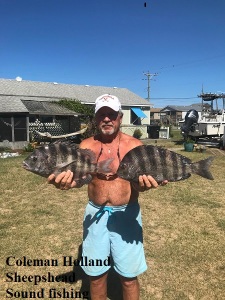 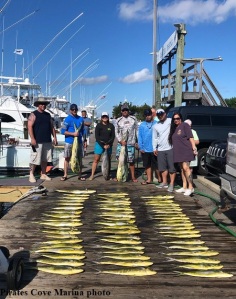 This entry was posted in Fishing Reports and tagged Coleman Holland. Bookmark the permalink.
%d bloggers like this: