Surf Fishing Report:
The Island reported Croakers, Spanish bite at 45 and 44, Ramp 49 had Sea Mullet and Ramp 55 had Pompano. We have lots of Sea Mullet. Jon Long said he had caught them all week  in Kitty Hawk using sand fleas. We have Croakers, Small Spot and Bluefish as well.
The Ocean is still calm, cold and been flat all week. We always refer to it as Lake Atlantic when its ike this.

Offshore Boats Report:
It was an impressive day for the fleet catching Blackfin, Yellowfin, a slew of Tilefish, both Golden and Blueline. I had golden for dinner this week. Every once and a while someone remembers I like fish. There were a few Mahi caught also Blue Marlin and Sailfish releases.

The winds are SW at 7 and the water temp is 70 degrees. Partly cloudy, light winds, flat & glassy. 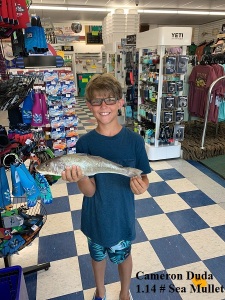