Surf Fishing Report:
Hatteras Islands ramp 44 had an exceptional day reporting Pompano, Bluefish, Spanish and Sea Mullet. The Ocean was rough yesterday. There were a few Sea Mullet and Spot scattered on the north beaches.
I have a couple of Kids pictures this morning. The look on their faces say a lot but I hate getting pictures with no caption to add.

Offshore Boats Report:
The Bluewater fleet laid out Yellowfin, Dolphin and Tilefish on the docks but the big news were the amount of flags that were flying. One boat released 7 White Marlin and another 5.

The winds are W at 6 and the water temp is 77 degrees. Mostly sunny, light winds, clean nice swells. 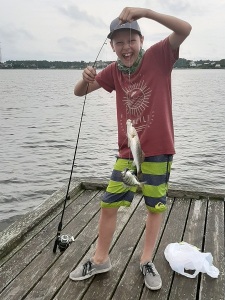