Surf Fishing Report:
Everyday on the Outer Banks is a good day.
Lots of Spanish at ramp 44. Some small Pompano in Avon. I wish I had more but fishing in general is just slow. On this side of the bridge there has been small Pompano, Sea Mullet and Spot.

Offshore Boats Report:
The fishing was about the same yesterday as it was most of the weekend. There was a abundance of Dolphin with some boats catching their limits. Some Wahoo was reported as well. Billfish were released.

The winds are SW at 6 and the water temp is 76 degrees. Mostly cloudy, light winds, small swells. 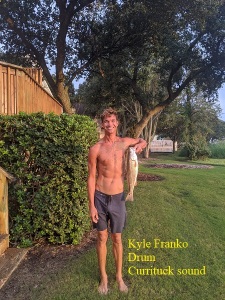