Surf Fishing Report:
It was a nice day. Unfortunately the conditions were poor for fishing. There were a few Puppy Drum in Avon and over-slot Red Drum reported off ramp 44. Most of my news has come from ramp 44 for the last couple of weeks. News have been almost non existing on my end of the line. There were Puppy Drum reported in Corolla and Neel and Courtney Smith caught two nice ones. Looking good!

Sound Fishing Report:
There are people fishing the Little Bridge on the Nags Head/Manteo causeway this morning but not catching so my source told me.

The winds are E at 7 and the water temp is 66 degrees. Partly sunny, breezy, showers expected after 2, messy swells. 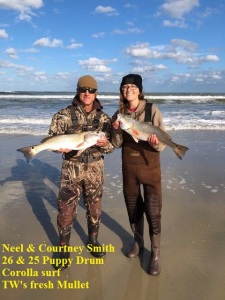 This entry was posted in Fishing Reports and tagged Courtney Smith, Neel Smith. Bookmark the permalink.
%d bloggers like this: