Surf Fishing Report:
Hatteras Island reported some nice Bluefish in Avon, Puppy Drum and small Pompano at 48 and drum at ramp 55 with some Spanish mixed in. I have pictures of some Bluefish caught but got not much info with the pictures. They said they caught multiple Drum and Bluefish. The Tyson’s said they caught all there fish at Bodie Island with blood worms from TW’s Tackle. That goes to show we have the best bloodworms.

Inshore Boats/nearshore Report:
One of the nearshore and inshore boats braved the rough seas and caught nice Bluefish and Puppy Drum.

Offshore Boats Report:
The fleet stayed in the creek yesterday due to high winds.

The winds are NE at 14 and the water temp is 78 degrees. Partly sunny, chance of showers, breezy, rough Ocean. 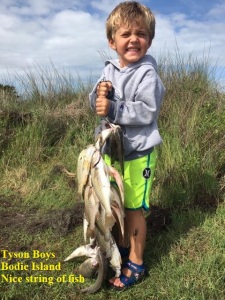