Surf Fishing Report:
Another day began with heavy fog and some rain showers in the forecast.
There were Sea Mullet and Puppy Drum caught at the Point. I have friends fishing the point this week and it has been slow. There was a fair amount of Sea Mullet in Frisco.
Drum fishing is good on the North beaches and Trout fishing was really good in the Kitty Hawk, Southern Shores and Duck area. Anglers have been catching their limits in Kitty Hawk. There was a citation Speck caught from Kitty Hawk surf this morning. Picture tomorrow.

Offshore Boats Report:
The offshore fleet made it out yesterday and it was a good day on the water for fleet reporting good catch of Yellowfin, plenty Blackfin, some Mahi and a whopping 72 lb citation Wahoo.

The winds are NW at 3 and the water temp is 68 degrees. Cloudy, no wind, med swells 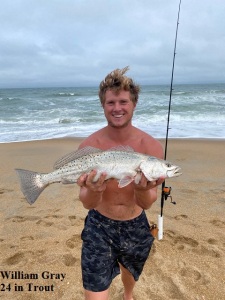 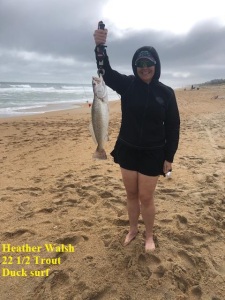